BRKACI-2008 - A Technical Introduction into ACI

BRKACI-2004 - How to setup an ACI fabric from scratch

Basic Packet Flow in an ACI 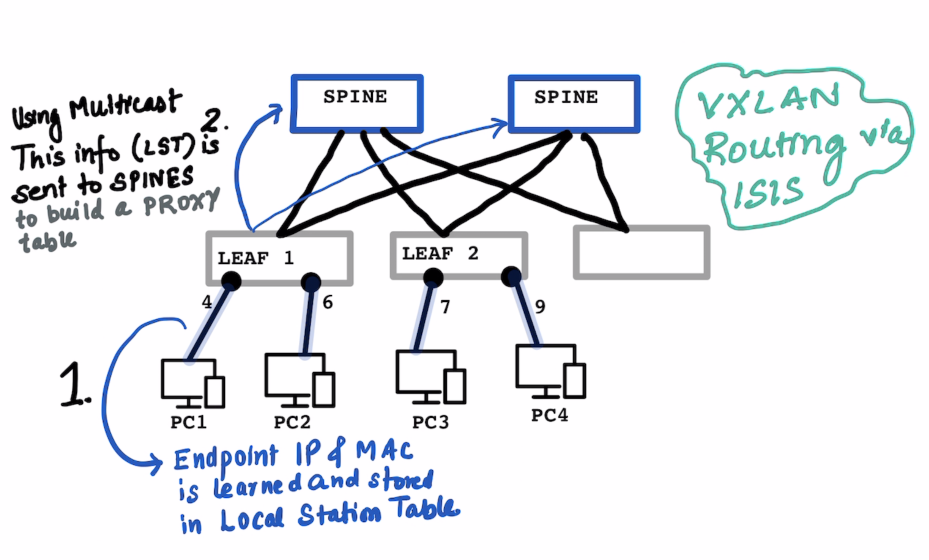 ON THE LEAF : In the local station table the IP address , MAC Address and port number is learned on the Leaf

The learning switch does not know the subnet mask of the learned the IP Address. (hence /32)

In a “normal” switch the “switching” happends based on the learnt MAC Address , in ACI it is a combination if Switching and Routing.

ON THE SPINE : The Leaf sends this information to the Spines using multicast , so that it can send it to multiple spines at the same time. The SPINEs build up a PROXY table which has informations on the IP Address and Corresponding VTEP.

Inter Fabric Routing setup is via ISIS Only , BGP is only used for L3 Out. 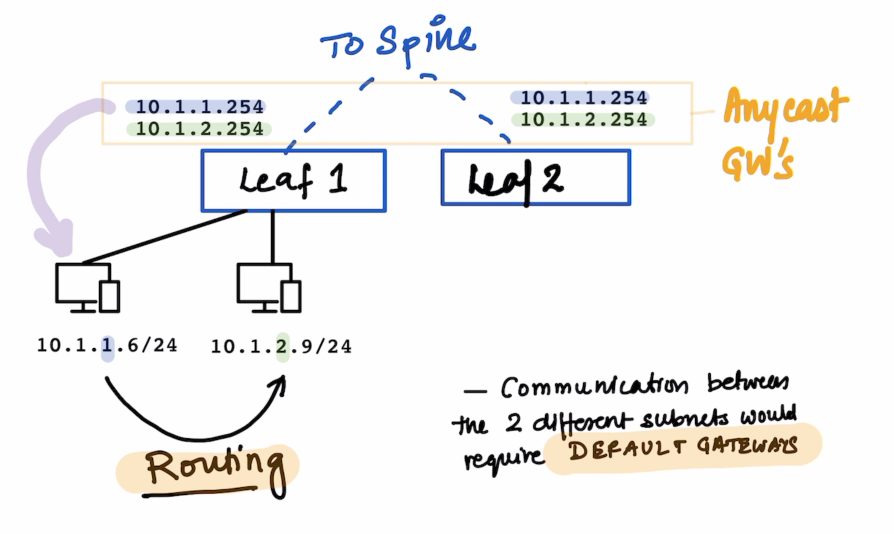 Since the two PCs above are in different Subnets , Routing would take place when they need to talk to each other.

The default gateways for the same are configured on the leafs.

For communications for the devices on the same Leaf the Leaf responds to local ARP queries.

The VLANs in ACI are not significant within the ACI fabric ; The VLANs are still significant for backward compatibility with L2 Out Networks.

What is an endpoint ?

It’s a combination of MAC address and IP Address.

We can see it on the APIC

MAC and /32 IP Address are stored in the Endpoint Table Exception is L3 Out , If we use the same mechanism of learnign all the IP Address , on the MAC address on Nexus router we would have thousand of /32. Other IP Information is used int he Ip Table just as the normal routing. That is the reason why we use arp table for L3 out. 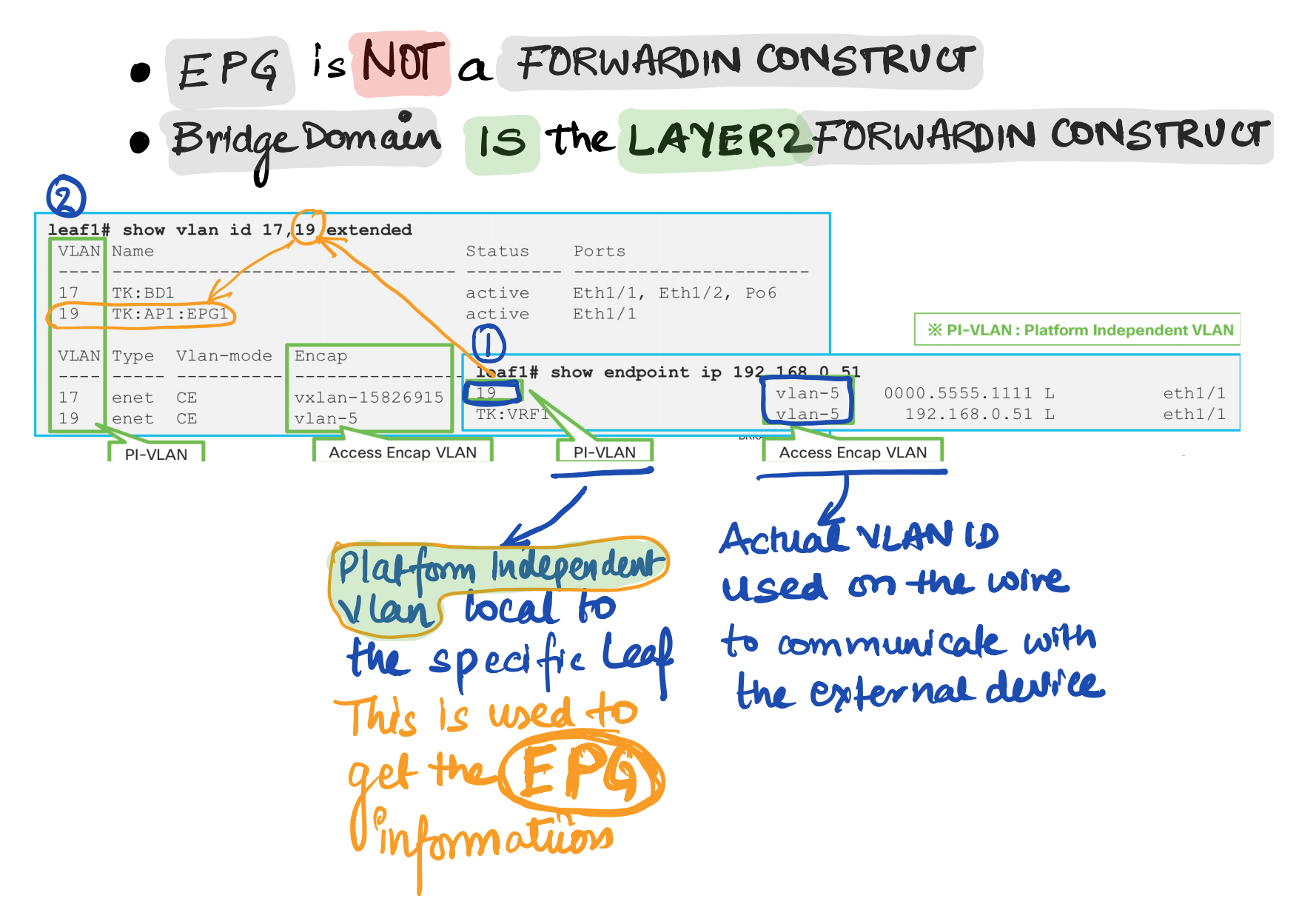 Endpoint Group is a logical grouping of hosts (EPs). Each EPG belongs to a bridge domain (BD)

EPG is used to implement the filtering with a contract.

EPG is basically a security domain , but EPG is still using VLAN. So what is VLAN being used for. VLAN is just an identifier for the EPG

EPG is not a forwarding domain. Bridge Domain is the L2 Forwarding Domain If its L3 , its the VRF.

How to check endpoints

What is pervasive GW for? 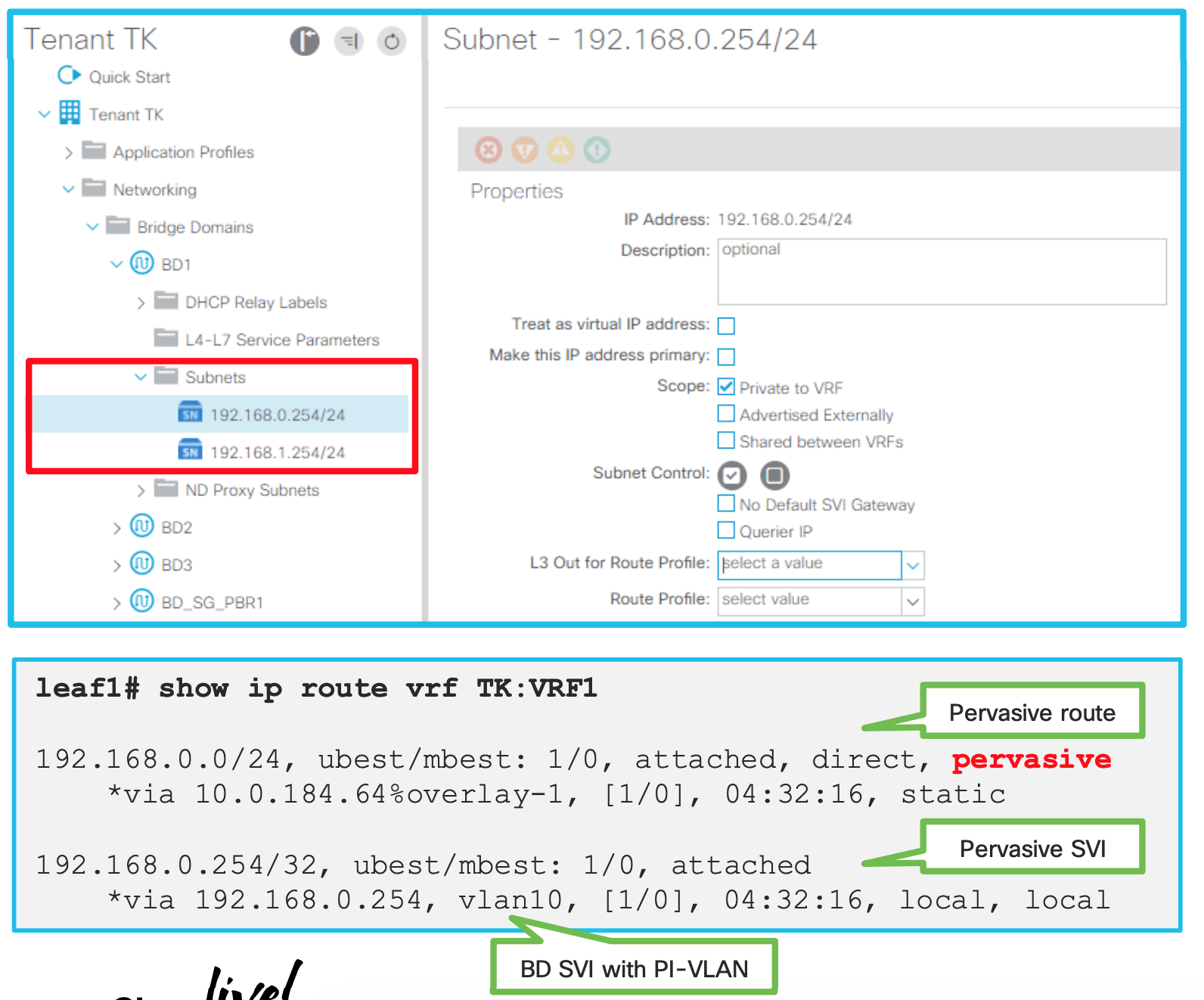 How is pervasive GW deployed? (When no contracts associated)

How is pervasive GW deployed? (When a contract is associated) 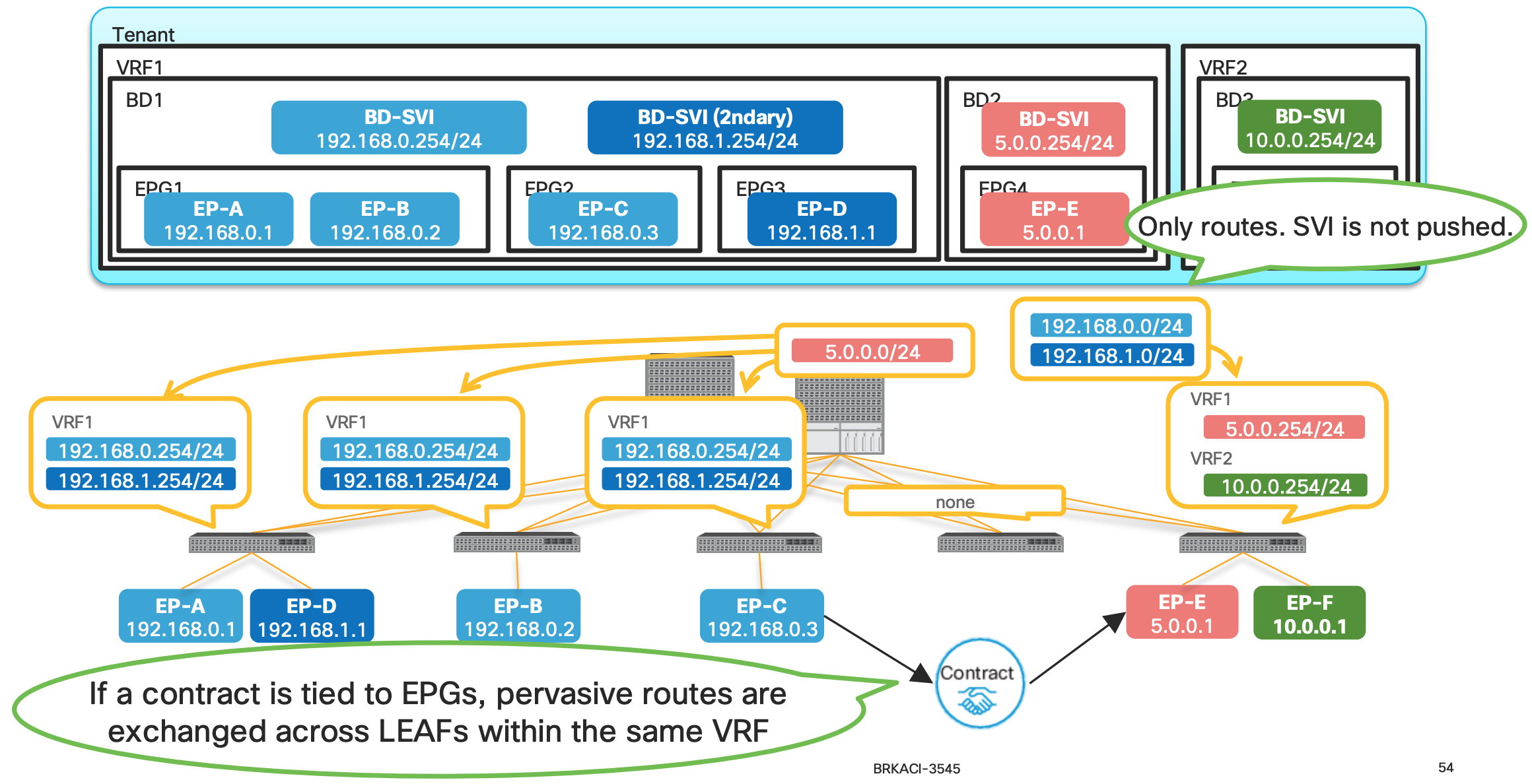 Why are we doing the above exchange of routes ?

What is a Spine Proxy

Although both local and remote endpoints are learned from the data plane, remote endpoints are merely a cache, local to each leaf. Local endpoints are the main source of endpoint information for the entire Cisco ACI fabric. Each leaf is responsible for reporting its local endpoints to the Council Of Oracle Protocol (COOP) database, located on each spine switch, which implies that all endpoint information in the Cisco ACI fabric is stored in the spine COOP database. Because this database is accessible, each leaf does not need to know about all the remote endpoints to forward packets to the remote leaf endpoints. Instead, a leaf can forward packets to spine switches, even if the leaf does not know about a particular remote endpoint. This forwarding behavior is called S P I N E - P R O X Y.

Now coming back to the question of Why does ACI push pervasive routes to other LEAFs after a contract?

###Without the pervasive route:

This is what the outputs looks like in CLI when the contract is applied: 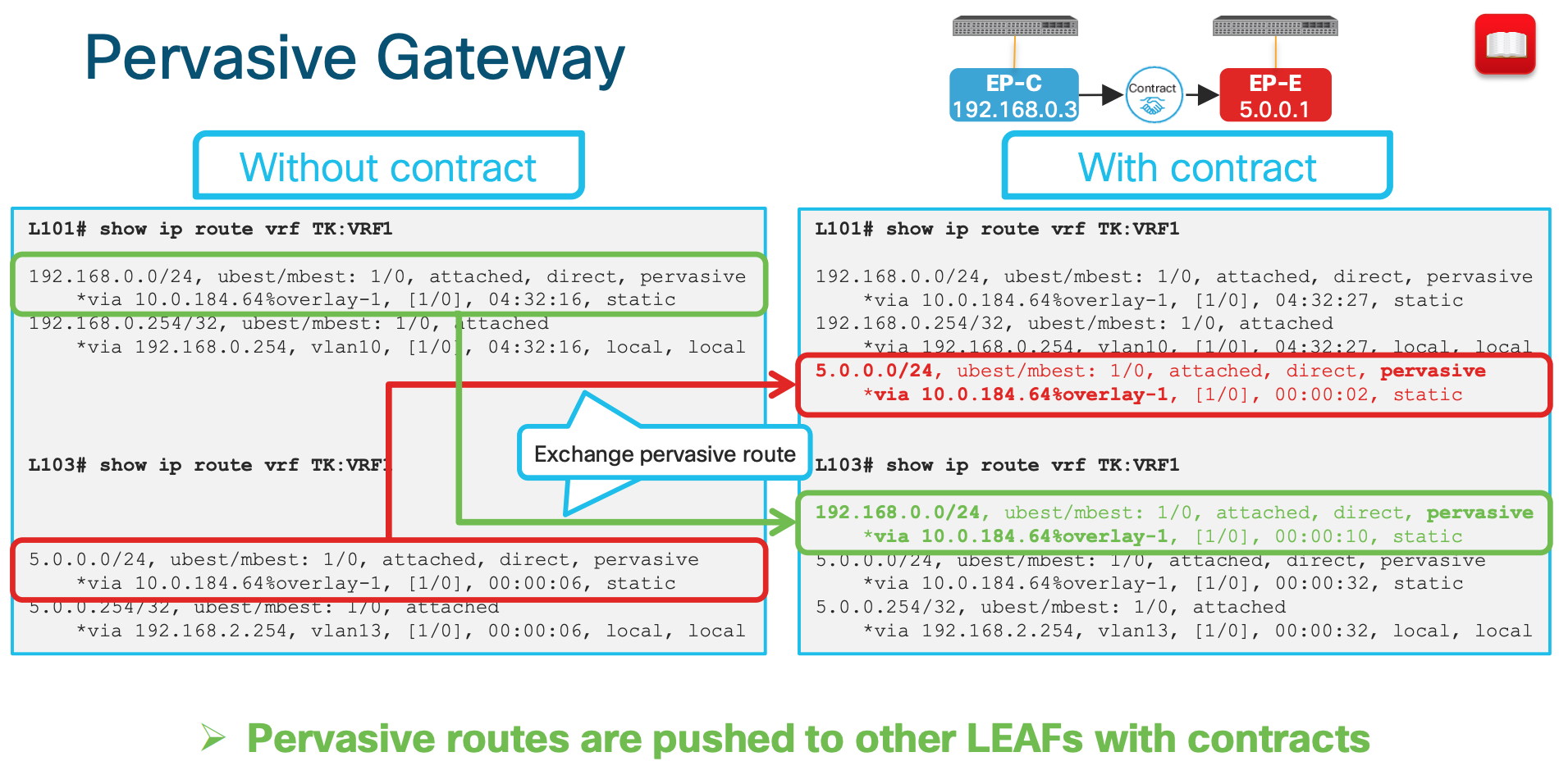 This is one of the best slides showing the communication scenarios and whether its switched or routed. Look at the detailed explanation below:

ACI Lab Use Cases Walk Through

Joining the Interface Profile and Switch Profile together makes the whole Switch . 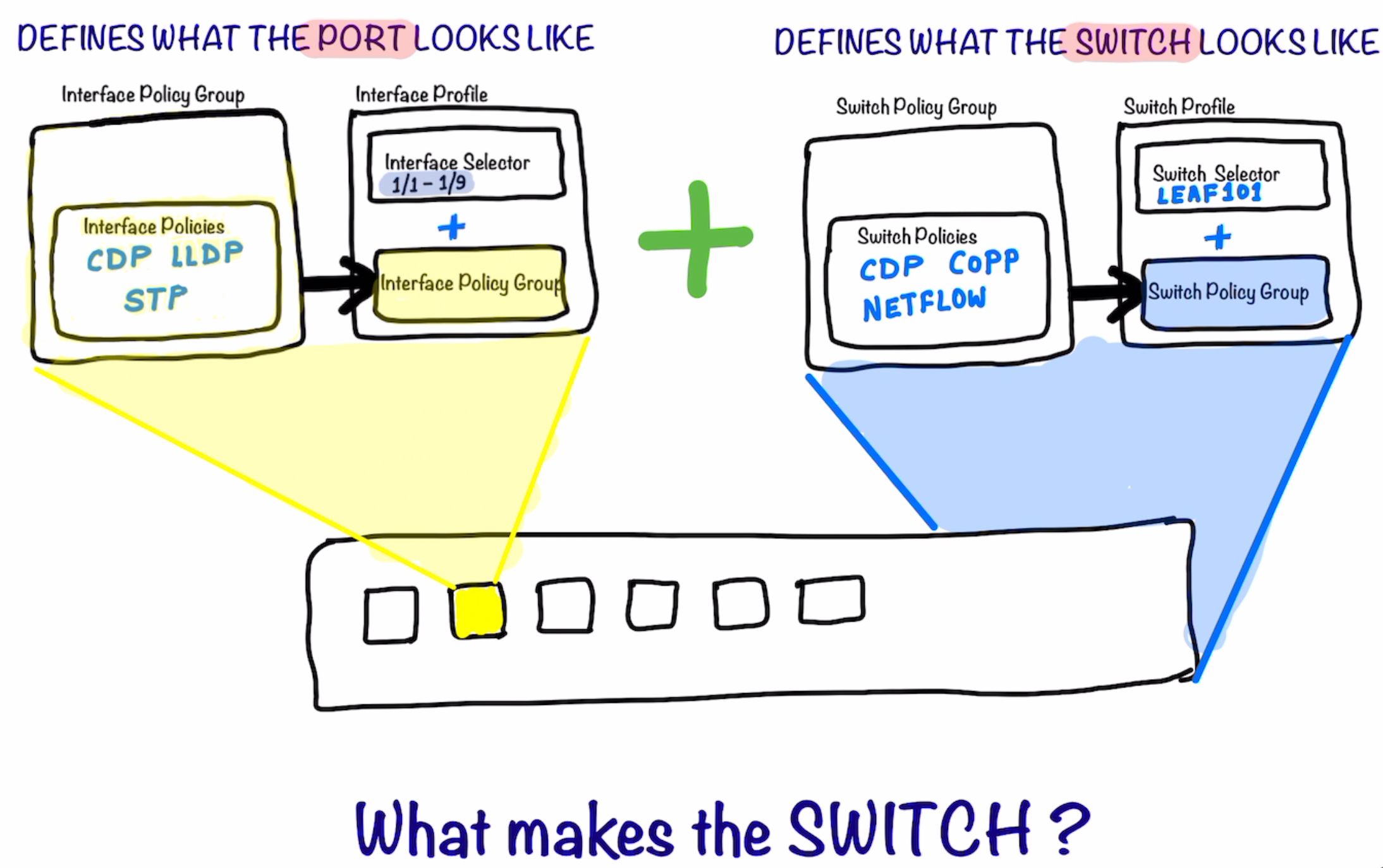 After the step above ; as a next step we start defining what are the VLANs that could be allowed on the port. Remember that these VLANs still are not assigned to the port. They are just the vlans which are being allowed to be configured/used on the port.

The External Domain and the allowed VLANs are now added to the Port Profile using AAEP ; which ties them together.

The picture below illustrates what’s explained above in more details. Look at how the different components are called and tied to each other .

The Switch Policy Group is tied to the Switch Profile which in turn is called-in in the Interface Profile . 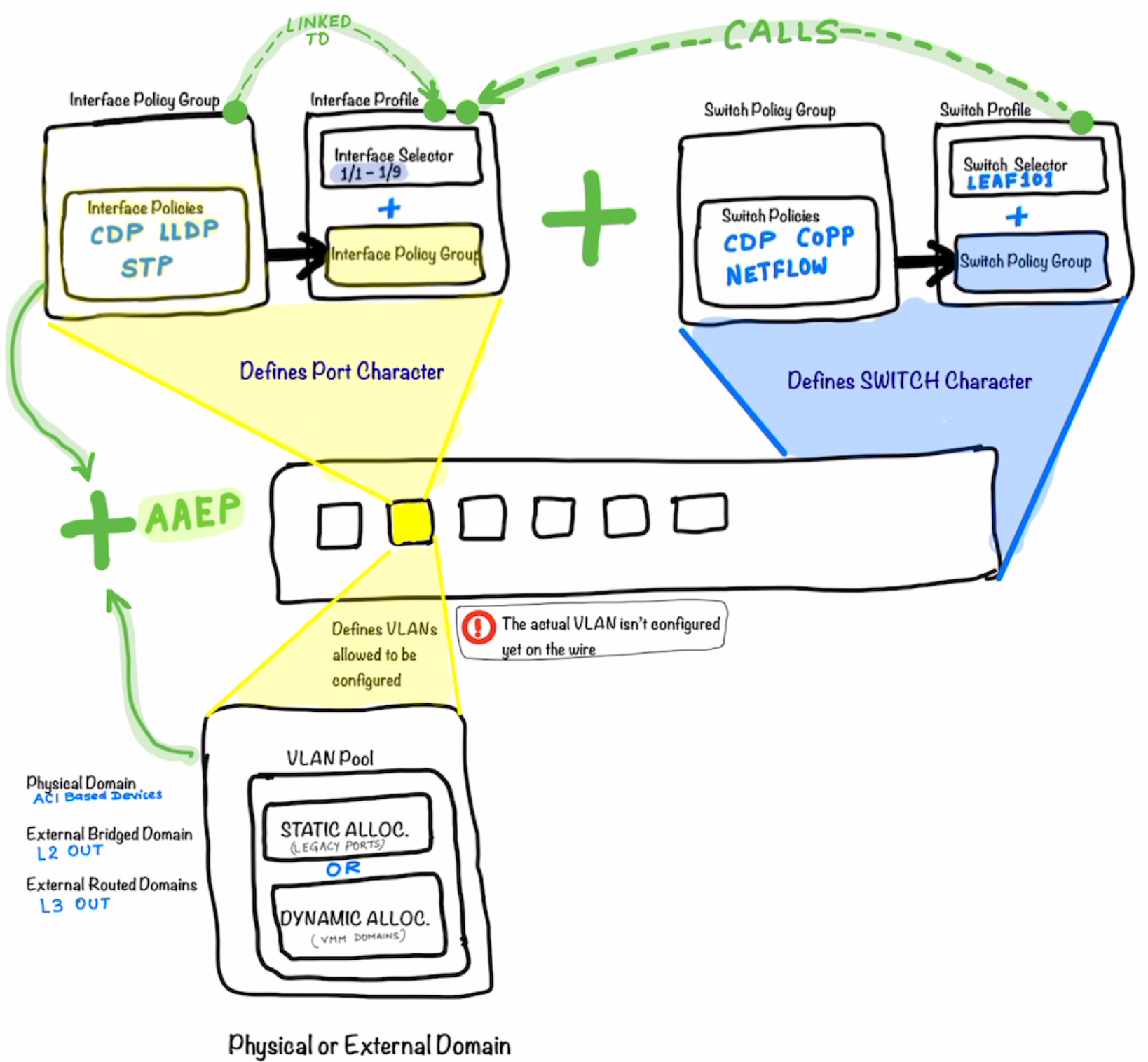 Now as a next step of progressing on the workflow above ; we create the Tenant under which the EPG is created and tied to the port which is the actual networking construct in ACI and completes the whole picture .

The picture illustrates that the Tenant is created ; under which the VRF and the Bridge Domains are created.

After that the Application Network Profile is created under which the EPG is defined.

This EPG is in the end tied to the the Bridge Domain completing the whole workflow.

Notice that there is no explicit mapping between the Switch Profile / Interface Profile configs and the Tenant Config (EPG) ; so do not confuse 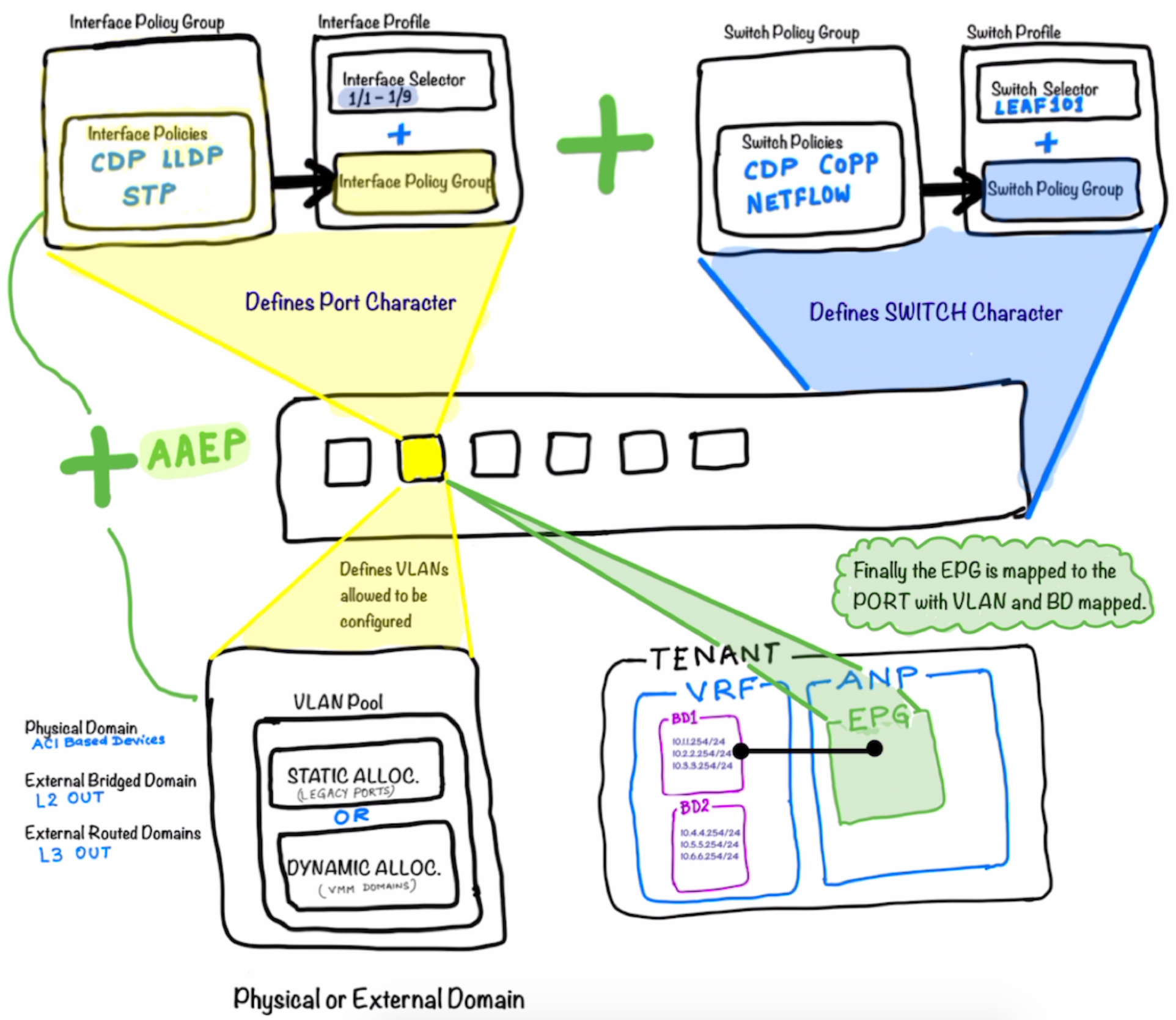 In the above topology we configure the following topics: 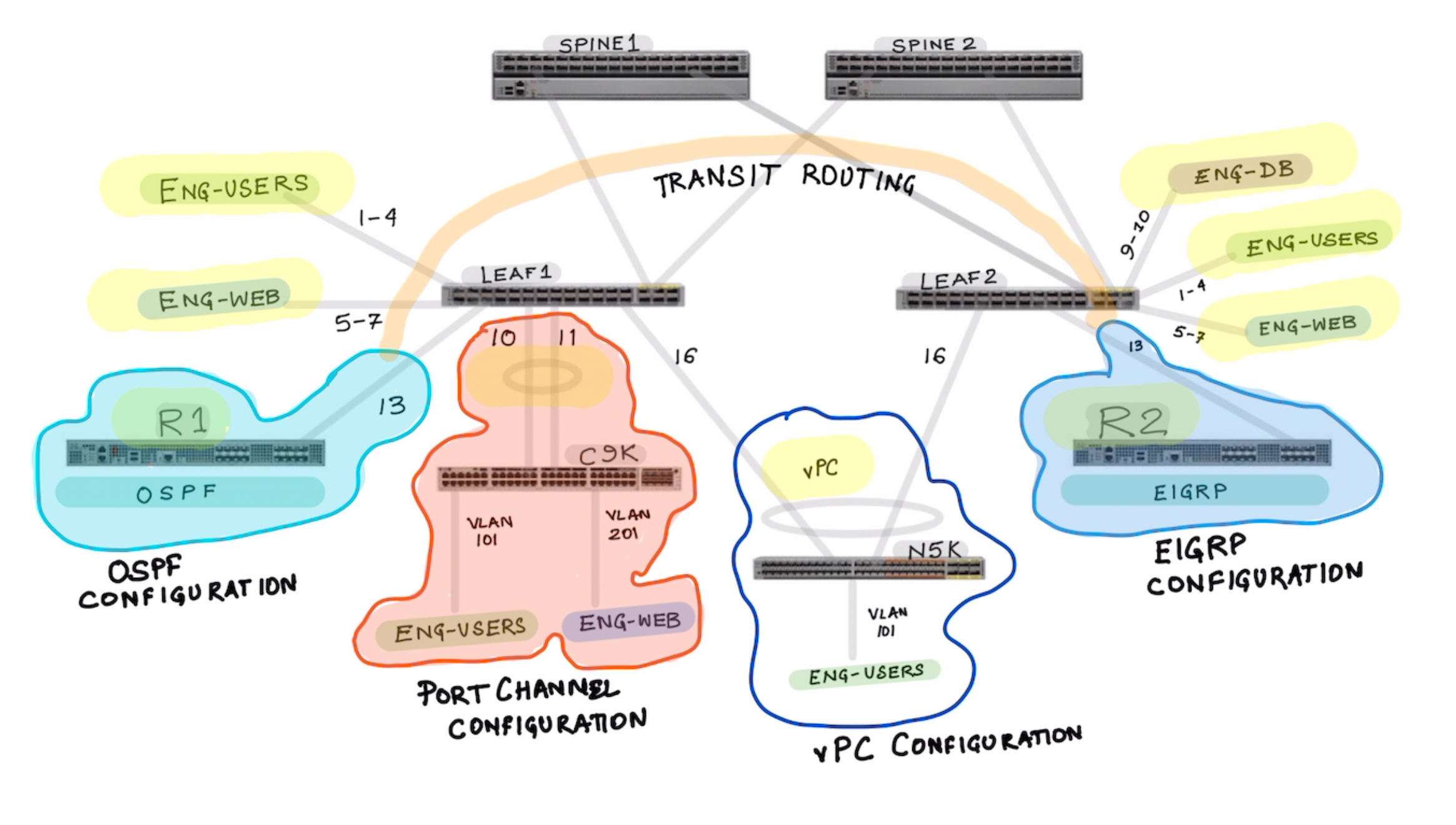 Notice how the port channels are differently created for Regular Port Channel and vPC based port-channel.

Show where you see the port-channels once they are created.

Notice in the picture below , the interface profile is switch specific . It makes sense so that It can be tied to a specific switch profile. 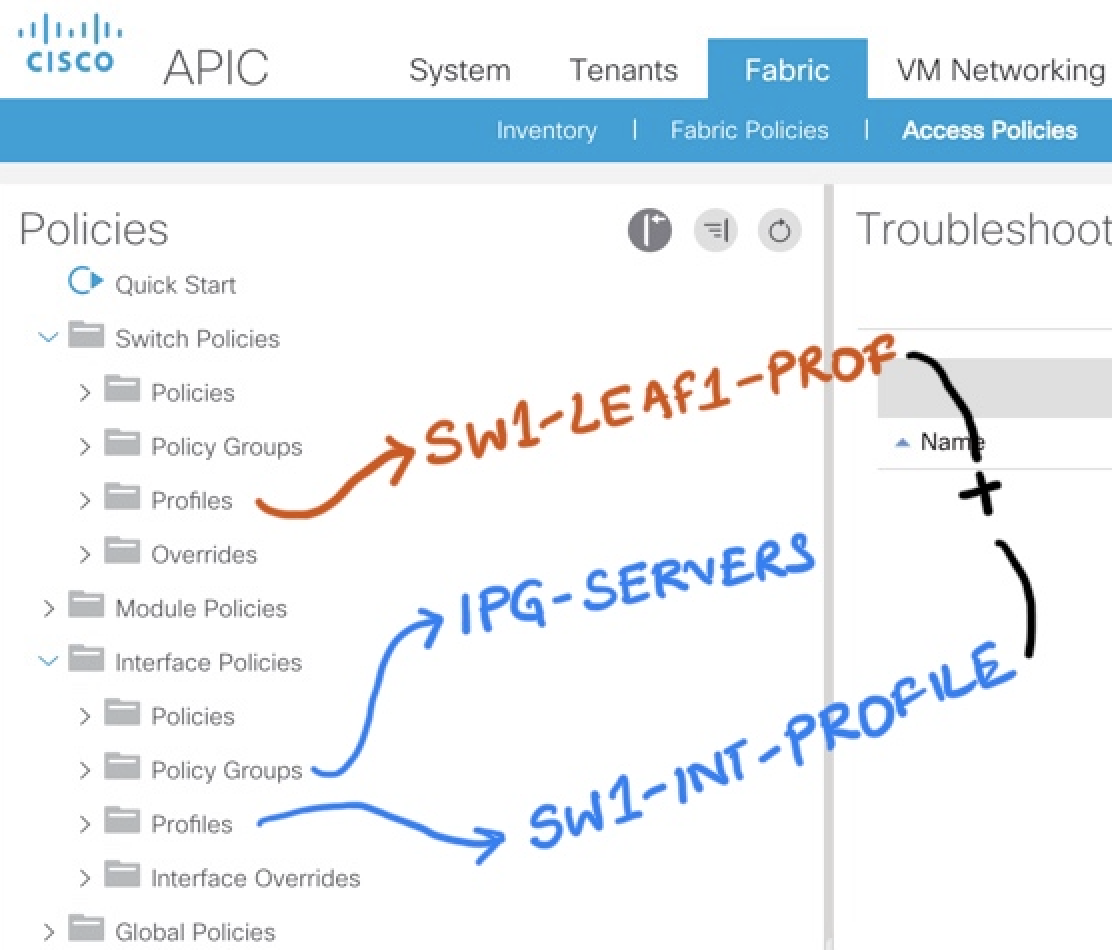 VIDEO HERE OF THE ABOVE INTEFACE CONFIGURATIONS

How to configure VPC and Map the interface configuration .